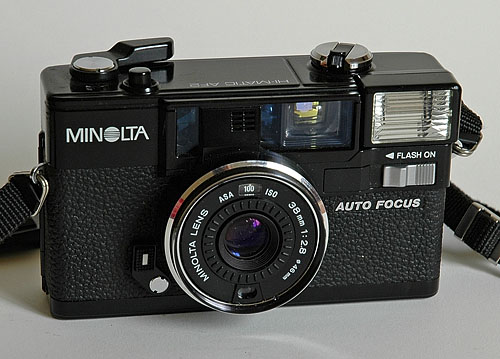 The original idea I had for this article was to be about traveling / road tripping with non-photographers.  Spouses, Partners, Family, Friends, basically anyone whose first thought when planning a trip isn’t “what gear do I bring??”  But I decided to make it into an user review about the Minolta HiMatic AF2 as a perfect camera to bring when traveling with non photographer companions.  Besides, not all of us are super neurotic about these things right?

These thoughts don’t sound familiar to anyone out there do they?

-What?  We’re going on some guided tours when we get there?  Well, alright, I guess one of my medium format kits should do the trick?

But maybe even the smallest, lightest medium format camera you own, is a no-go, and you start to look at your 35mm gear…

Not saying that I go through this checklist when I’m going on a non-photo trip (I don’t even own an 8×10….yet), but I did have some decisions to make this past August when a friend proposed a guys’ road trip to Birmingham, Alabama to attend an independent film festival.  Being as I’ve never been to Birmingham, I wanted to have some gear that I would be comfortable with in any situation that I could possibly find myself in, and that I could work quickly with.  I didn’t want to hold up everyone else doing photographer things, just want to be able to grab the shot and move on.

Looking over my stash of 35mm cameras, two jumped out as options:

Why?  Well up to that point I had been using the Hexar to shoot a series of images loosely inspired by Lee Friedlander’s America by Car, just sort of my commute to and from work.  I had been enjoying shooting with Hexar a lot up to that point, so I thought that I would have opportunities to use it on the road.  The HiMatic AF2?  Well, it was an impulse purchase from Hamish Gill of 35mmc.com, and I had only really shot one test roll with it.  I really wasn’t all that comfortable with it yet.  I’m not really sure what I was thinking, taking an untested camera on a road trip!

I grabbed a hand full of Tri-x and FP4 for the Hexar and about 8 rolls of Superia for the AF2 and packed for the trip.

While on the trip, something weird happened; the Hexar never left the hotel room.  I never even took it out of my bag. Oh I meant to shoot some black and white, but I had been using both cameras without staps, and I wasn’t about to carry my backpack everywhere (I wanted to travel as light as possible), so I just carried the AF2 everywhere in my hand. After all it’s an extremely light camera (since it’s mostly plastic)

Background on the Minolta AF2, released back in 1982, it’s a camera that was caught in that in-between era of autofocus and pre-autofocus compacts.  The era where it didn’t look weird to have a point and shoot consumer camera with relatively new tech like infrared autofocus with a manual film advance lever and rewind knob.  It has (depending on how you look at it) a flexible 38mm 2.8 Minolta lens, that according to the manual has 4 elements in 3 groups (that is if you care about that sort of thing…).  *PERSONAL NOTE** I actually love the focal lengths between 35mm and 40mm, those are walkin’ around lenses for me. Shutter speeds range from an 1/8 of a second to a respectable 1/430, and the lens goes from 2.8 to f17 (that’s an odd number, but that’s what the manual says!)  The only disappointing thing in my opinion about the camera is that the min focusing distance is almost 3 and half feet.  I like to get close with a moderately wide angle lens, it gives an interesting sense of space to a photo, and thankfully most lenses in this range can focus pretty close.  So that this lens can’t is a slight negative in my mind, but that just means that you have to work around the limitations of the camera.

This camera is typical of the early 80’s era of compact cameras where it beeps at you if you try to photograph in certain situations; like if you’re too close (you’ll get a beep-beep-beep) or if you try to take a photograph without flash and the camera thinks you need flash, it will tell you (you’ll get a long beeeeeeeeep), and there’s a helpful sticker on the back just incase you forget what beep means what.

the camera has very few controls, you get a self timer lever in front, a switch that turns the flash on, and the film speed selector which is around the lens.  The meter eye is right below the lens, so if you love to use filters, you don’t have to worry about exposure compensation since the meter will meter through the filter as well.  I also almost forgot to mention that it takes two AA batteries. Common, found in pretty much any and every place on Earth AA batteries.  No expensive lithium, or hard to find speciality batteries for this camera! Expect about 30-35 rolls before you need to replace them, although I’ve started doing it when the flash recycle times (around 7 sec) start to run a little longer.

Oh, if you do buy one of these, when you take a photo, the shutter lets out a wheeze, not a click, a wheeze.  I’ve heard it referred to as a robot sneeze, that’s probably the best way to describe how it sounds.  Weirdest sounding shutter I’ve ever heard.

The camera was a joy to shoot with during the trip:

I know that people talk about the lost art of reading maps and atlases, but the fact that we have interactive maps and GPS on our phones is nothing short of amazing, I could just imagine how turned around we could have gotten on this trip 15 years ago…

I didn’t know this before hand, but Birmingham has a strong mining and iron working industry.  One of our stops was a closed iron factory, Sloss Factory: 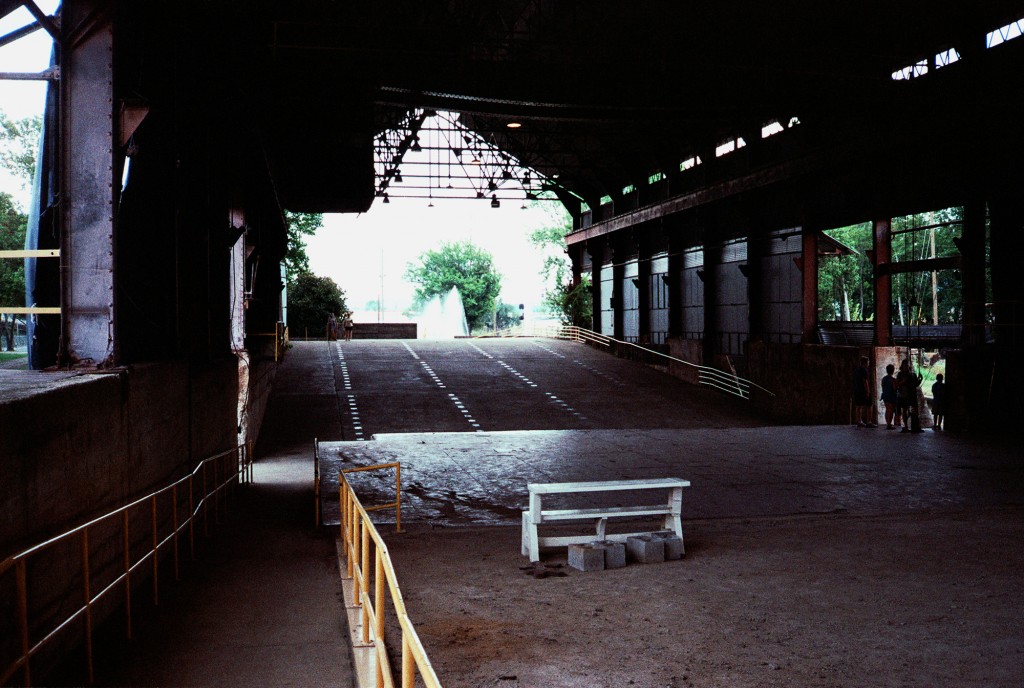 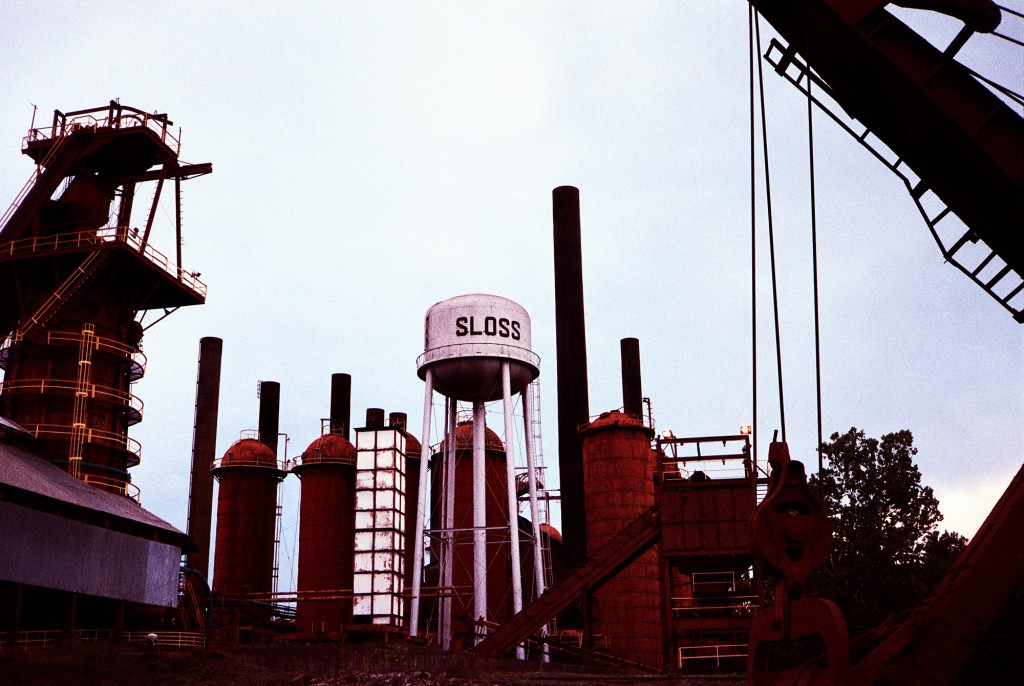 I always like to keep my eyes open for little details like this that someone thought to write:

Birmingham also was ground zero during the Civil Rights era.  I didn’t get a chance to visit the 16th Street Baptist Church, but I did run across this historical marker downtown:

Because of the photos from this trip, I now have made the HiMatic one of my daily diary cameras (the other being my Olympus Stylus Epic), these are cameras that I keep loaded with film, and I make it a point to photograph constantly around the house.  My wife, my child, the visitors that we have, our dogs, whatever might seem to have a bigger meaning 5, 10, 15 years down the road, I’m making photographs of it.  Sending the film off and getting 4×6 prints (and my negatives!) back.  This is the perfect camera for this…

Oh, and the title of this post?  While we were in Birmingham, one of my friends noticed the HiMatic, and he remarked that it looked ‘Analog as fuck’, to which I replied “Why yes, yes it is…”

PS – I’d like to give an extra shout out to Lance Camera Straps, I loved this strap so much, that I bought a second one, so I have one on the HiMatic and the other on my Leica M4P